The Leyland Force 7 hardtop and a sedan/hardtop project

A brief and sad history of the Leyland Force 7 hardtop.

When the Leyland Force 7 arrived stillborn in the ashes of the Leyland Australia fire sale in 1975, Australia missed out on possibly the most advanced car to be offered to the Australian public until that time. The Force 7 hardtop was based on the Leyland P76, which after nearly three years on the market had all the kinks worked out. The Leyland Force 7 was technically ahead of its competition the Falcon Coupe, the Monaro Coupe and the Chrysler Charger and Hardtop.

The Force 7 was a true five-seater hardtop with a hatchback, preceding the Torana by several years. Leyland Australia had already used the hatchback concept on the Australian market only Morris Nomad. Unlike the Falcon and Monaro, the Force 7 did not sacrifice comfort for styling, and offered an interior where the rear seated passengers had the same amount of room as the P76 sedan passengers, including headroom. This also gave the hardtop its distinctive look.

Although based on the sedan, the Force 7 did not share any common panels with the sedan. The Force 7 did use the same suspension, engine and transmission package as the P76 sedan - a flexible and light alloy V8 and the Borg Warner Single rail 4 speed or Borg Warner 40 automatic transmission. The steering was light and direct and featured a turning circle surprisingly small for a car of its size. The interior was similar to the P76, but offered an upgraded dash featuring a metallic instrument surround (the P76 had faux wood grain), sports steering wheel and tachometer. A luxury ‘Tour de Force’ version was planned.

It all came to an end when the evil English closed Leyland Australia in late 1974 and sold it to the Australian Government in a desperate attempt to raise cash to keep the UK operations running.

How close had Leyland been to offering this car to the public? They had been in limited production and an unknown number had been made and stockpiled at Zetland when the pin was pulled. These completed cars were crushed - except for 8, which were offered to the public at an auction, and one that had been sent to England. All of these cars are still in existence 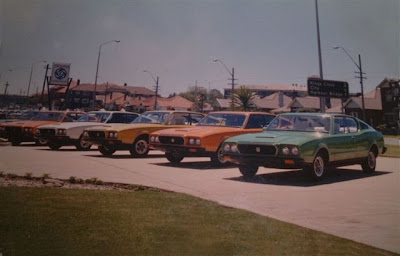 With only 9 cars in existence, and demand strong, the idea of building one from parts has been much discussed in Leyland collector circles. Despite the talk, I had never seen one of these fabled conversions in real life. I have seen photos of a complete set of Force 7 panels that I know are owned by one NSW based Leyland owner. It was always a ‘what if’ idea.

Force 7 parts such as instruments and suspension parts are commonly available and collectors have grilles, nosecones and panels stashed away. The alloy wheels, limited slip diffs and steering wheels were used on the ‘Targa Florio’ sports option for the P76 Super sedan.

Technically, one could build a Force 7 if they had all the parts, capability and time.

Recently, I was sent photos of a project that someone had begun – converting a P76 sedan to a Force 7 coupe. Sadly, they have decided to abandon the project and are offering it for sale within the Leyland collector movement. 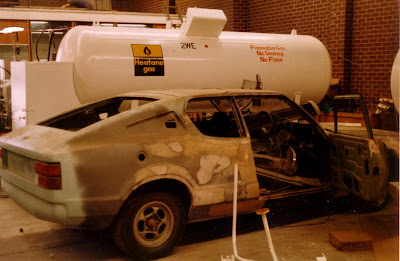 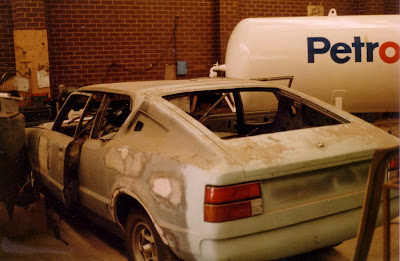 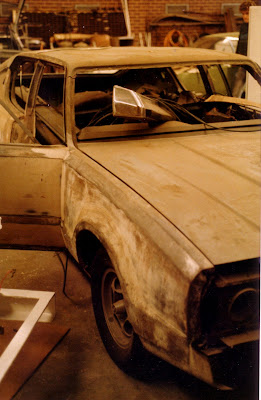 No nosecone, grille or bumper - tough to source/reproduce

There are a few major problems that a potential P76/Force 7 hybrid owner might face in completing this conversion. The car still has B pillars, and it is missing several panels such as the proper grille and nose cone. A Force 7 restorer advises that these parts are still available, but closely held by people, although copies could be made in fibreglass. The side glass is also different to the sedan, and the bumpers would have to be made, as these are also different to the sedan. The conversion, to an acceptable standard, would be expensive and time consuming. It would be impressive though.

If anyone has completed a Force 7 sedan/hardtop to a registered and running condition – can they please send me some details. It’s a project I’d like to know succeeded for someone.

Further info on the Force 7 can be found at:

I have just returned from my roadtrip from Los Angeles to New York and back.
I took 2700 photos, of which 2000 are cars.
Over the next few weeks I will be posting some articles on the US motoring scene.
Posted by D.C. Haas at 11:54 PM No comments: