Someone gave me a Stig keychain for festivus. I broke the chain off and will use him in a series of improbable photoessays.

I present Stig Driving a W-Class Melbourne Tram as my first effort. 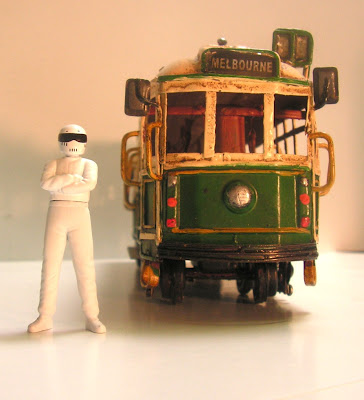 It's a Gas - LPG for newbies

Over the festivus break I drove the XF Pano down to Victoria and travelled into Central Victoria, and around Melbourne. I put around 2500 km on the car. All on gas, as the pano is a dedicated LPG car. Apart from a small problem with the C4 transmission (it doesn't like going into 3rd, unless I exceed 100 km/h or 4000 RPM!) it ran very well. The overheating problems have been resolved, and although I travelled on some very hot summer days, the pano did not overheat once. Thermo fans are a good thing.

I did experience a few problems with the LPG system, that I wish people had told me about . When I mention them to people who have used LPG they tell me they know all about them!


Problem number one I knew about when I bought the pano up from Melbourne last year. Around town it is not a problem, but refueling four times to travel from Canberra to Melbourne is not good. To resolve this I am thinking about fitting a second tank, a donut or toroidal tank, in the place where the original XF fuel tank used to reside, behind the passenger seat.

Problem number two was new to me and occurred at the Hume service centre near Wangaratta. I pulled in on fumes and the LP gas just would not pump into the cars tank. I had no idea what the problem was and went in to tell the service centre cashier that I thought her pump was broken. She told me that my tank was hot, and this was a common problem, and to just wait 15 to 20 minutes. That ended up being a 30 minute wait. The same problem occurred on the return trip at the Gundagai service centre. On that occasion, a queue of frustrated people behind me led me to park the car, have a late afternoon snack and attempt a refill 30 minutes later (successfully). On both days the temperature was above 30 degrees celsisus.

I have discussed this phenomena with several LPG users, who all confirm its. Some said it was the reason they kept their car dual fuel. I'm not sure how to resolve this problem. One woman told me that before the drought she used to hose the tank down until it was cool enough to refuel. 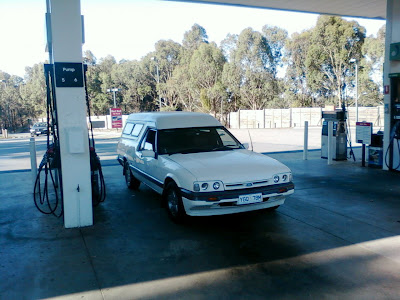 Pano cooling down in shade, awaiting LPG
Problem number three occurred twice, and fortunately I was able to drive a few km's to refill the tank. The problems then disappeared.

Problem number four occurred twice. I pulled in to refuel in a petrol station in Melbourne and they had no LPG pump! At Gundagai service centre, there are at least 20 petrol pumps and one two nozzle LPG pump. There was a queue for this, and they didn't appreciate a person with LPG problems holding them up. A major petrol stop on the Hume needs more than one LPG pump.

Although these problems are inconvenient, the advantages of LPG are greater than these minor problems (to be overcome).  A car on LP Gas is kinder to the environment, with fewer harmful emissions than a petrol or diesel powered car, and is much cheaper to run. Typically fuel ranged from 58c a litre to 78c a litre (Gundagai). My fuel cost was a third that of the equivalent distance in a petrol powered V8 car (all my other cars are petrol powered V8's, except the bus).  I give LPG the thumbs up.

UPDATE APR 2010 - When having my car serviced, it was discovered that the sender on the LPG tank was faulty. It has been replaced and now I can drive several hundreds of kilometres without my tank APPEARING to be empty.
Posted by D.C. Haas at 5:29 AM No comments: