Summernats 2012 - How to get banned from Summernats - NUKINFUTS Gemini burnout

video by 'Blownhemi'
Steve Nogas, owner of 'Nukinfuts' the blown Gemini, has been banned for life banned for a year (see update 3 below)from Summernats competing in the burnout competition following an incident at the Burnout Finals on Sunday. 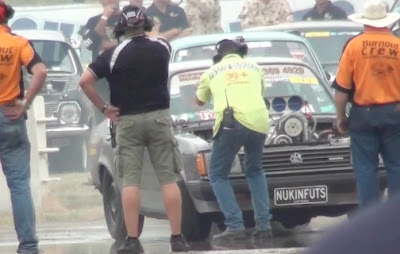 Marshall ordering him to stop

He doesnt. Car starts to move forward, everyone gets out of the way 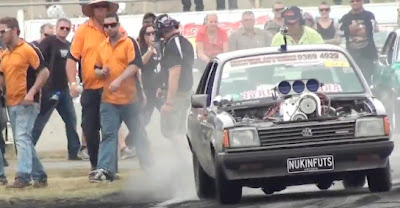 Burnout begins. A pretty good one as well. Smoke all the way, consistent run, lots of pirouetting on the Burnout Pad. Blows both tyres. 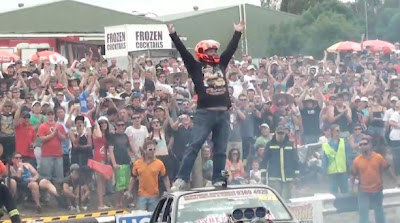 Crowd is in a frenzy - he celebrates a great run 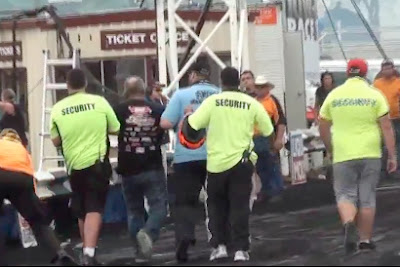 Then gets jumped on by security and dragged away - BANNED
I think security have overreacted here. They should have let him drive off the pad - and then tell him he was banned. This had the potential to turn nasty.
Update 1: video of the qualifying burnout has been posted on Youtube

Video posted by 'bdking29'
'bdking29' attached this description to the video on Youtube:
This is the begining of all the controversy with Summernats claiming that Steve Nogas did not Qualify for Sundays finals because he did not obey the fire marshalls directions, claiming the fire marshall told Steve not to start the car after it stalled when contact was made with the fence, then claimed to tell Steve to shut the car down once he re-started it. Clearly you can see at 0:48 we hit the wall and at no point did the fire Marshall tell us to shut it down, The Fire Marshall then signaled to the approaching tow vehicle that he wasnt needed at 1:49 and waved us through to exit the pad at 2:02 of the footage. Summernats have since told us we never qualified on friday but at 2:21 you can clearly see the official give steve a qualifying ticket and saying well done mate.
Update 2

From a Commodores forum:

Steve Nogas
Unfortunate the way things turned out at Summernats today, I know the way I went about things wasn't right and i apologize for that but telling someone that he cannot skid with two cars to go isn't right either. Summernats had 40hrs to get in touch with me about me driving off the pad after hitting the railing in Friday's qualifier when I was supposedly told by a fire marshal not to. We had a go pro camera attached to the car which clearly shows the fire marshal directing me to drive off the pad and no one telling me to shut it down. We will be uploading this footage from Friday tomorrow. Thanks Steve

I understand an image of Steve Nogas's form with 'come back Sunday' ticked has been posted online (I haven't found it yet).


Summernats management have reviewed the incident, and their decision and decided to rescind their lifetime ban and ban Steve for one year only. They have invited him to participate as a burnout track official next year (the year he is banned from competing). The official statement is interesting - it is all about the 'rules' and not about the stuffup in advising Mr Nogas he had been disqualified  (despite evidence indicating he wasnt) and the Summernats staff overly physical reactions. Despite that observation, it is a good outcome for all parties.
See all my Summernats 2012 posts!