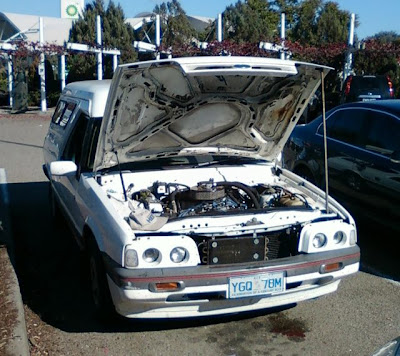 At Glenrowan - a bit of hot radiator overspill but all good so far!
Since the mid 90’s I have travelled up and down the endlessly rebuilt Hume Highway over a hundred times. In all that time, I have had five ‘failures to proceed’, three of them in Albury, two which required towing. Curiously, the Albury ones all occurred within Albury town limits. This leads me to conclude that the good burghers of Albury (but probably not Wodonga) have a death ray mounted on the hill overlooking the township, which they use in a ‘Cars That Ate Paris’ style operation to ensure that despite the Hume now bypassing the town, business remains strong in the mechanical/automotive/towing field.
I’d known my transmission was a little fragile, but was nursing it until I managed to get hold of an AOD transmission from a 1980 to 1988 Ford/Lincoln to install. The Balton boys are in L.A. as I type, looking for a suitable one. So I wasn’t too surprised when I saw a bit of smoke coming out from under the car, as I approached Albury, which looked like trans or power steering smoke. Yes, like the Athenian oracles, I can divine the type of oil from the colour of the smoke. Unlike the oracles, I can’t predict the seriousness of the damage!
When the smoke began entering the cabin of the XF Pano, (conveniently as I was almost through Albury, probably where the death ray is at its strongest) I decided to pull over and pop the hood. It didn’t look good, but the smoke stopped. All other fluids were fine, so it had to be trans. I topped it up, and started the car - as I drove off the smoke became pretty bad. It looked like I was a G20 riot control vehicle laying down a smoke screen to cover the baton charge. I decided that perhaps I should head back into Albury and let a mechanic look at the trans. 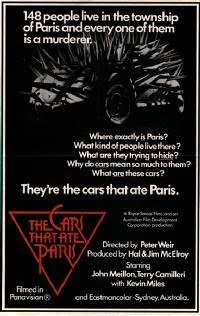 Too coincidental...
After the first guy in Lavington looked underneath, he said that there was now only one mob in town that could repair it properly, and they were in Wodonga. I started the car up, reversed out and put it in drive – where it simply refused to move even when revved to 4 thousand RPM. It would move in reverse though. So I backed into the gutter and parked and called Information for a towing number.
The towie arrived and as he hauled the poor dead car onto the tray black fluid poured out of the trans, from the yoke where the tailshaft meets the trans. It was black and dark and not cherry red like it should be. The angry demons of planetary gears, kevlar bands, and idiots who thrash Ford small blocks had wreaked their vengeance.
I reminisced about my towing career with the towie who told me about a recent smash he attended – with force so great an EF Station wagon had been torn in half ahead of the B pillar. The stoic police having to scoop up the smashed bones and flesh as the poor driver had been torn apart. You see some gruesome things in that game – and usually the first responder and person who gets the adrenalin/emotion outrush is the poor towie. It’s a job that is underrated in the toll it can take on people, and its important place in the community.
The trans workshop had the most immaculate floor I have ever seen – it was painted concrete and CLEAN. I suggested that we check exactly where they wanted the pano, as it was bleeding fluid. He went inside and it was decided that the floor was going to get dirty anyway, and that’s what apprentices are for, so drop it in the entrance. I felt pretty bad about all the oil on the tray and tipped the towie a fair amount to make up for the time it would take to clean that shit off.
I chatted to the trans people about my poor Pano, what had happened, what I reckoned it could be – and what my preferred plan of action was. I then caught a taxi to the station to await the bus to Canberra, which took me back to the Bush Capital at 9PM where my amigo Mark collected me and dropped me at home. I was pretty tired when I walked in the door. Next week I will have to catch the bus back to Albury (or is it Wodonga?) and pick up the Pano. 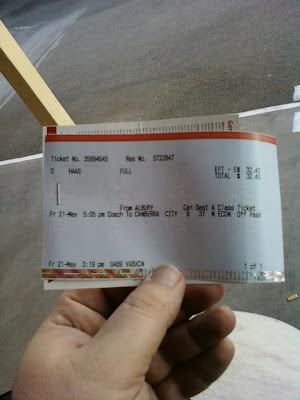 I hate Coach travel - but I did have a nice nap.
So what went wrong? My suspicions are any one or combination of the following: Exploded band (no forward motion, but could drive in reverse), burnt oil due to broken pump causing oil to boil and trans to overheat, welsh plug between engine and trans coming adrift (reason for black oil), perished gasket causing trans oil to leak onto exhaust and cause smoke leading to no trans fluid and overheating.
But I’m not an expert… so I await with interest the findings of the Wodonga Transmission Commission.
Update:

The damage was extremely severe. The reason black oil had poured out is that a band had let go, filling the pan with rubbish which clogged up pipes and not allowing circulation, which led to overheating, and the rear seal where the driveshaft enters the transmission housing had effectively melted away.

Serious damage. So, I had it rebuilt and picked up the car about ten days later. I drove to Melbourne and then back to Canberra. All was fine, then on a trip to NSW smoke came out from under the car, that familiar trans fluid on hot pipes smell. I refilled the trans and all was fine for few weeks. Then as the 2000 km service mark approached, it occurred again - I peered under the bonnet and noticed trans fluid slowly trickling out of one of the new fittings. I drove the car up onto a ramp in my drive way and gently tightened the fitting, but I didn't want to overtighten or snap it off.

I then headed back to Melbourne and called the trans place. The trip from Canberra to Wodonga was trouble free and they drove the car into their workshop while I went and wandered around Wodonga for half an hour. My diagnosis of loose fitting was accurate, and they tightened them, checked everything and I was on my way. They asked me to drop back in on my way back from Melbourne the following week, which I did and all was fine then as well. According to the window sticker, the next trans service is at 399,000 kms. Lets see how that pans out...

Of course I should have the AOD trans fitted by then, or not. I have a TH700R4 in the garage ready to go into my black P76. I bought that trans 5 years ago...

In my last post on Vernon Wells in the ATV, I said I would post a few more Crawford Production vehicle related posts. Here is the second, featuring the Bolwell Nagari.
The Bolwell Nagari Mk VIII is one of the cars in my Top Ten Dream Garage. An outstanding sports car, designed and built entirely in Australia, the Nagari was sold between 1969 and 1974. This puts it square in the sights of Crawford Productions when they were looking for a sports car to use in an episode of their police drama 'Division 4' in 1973.
Usually when Crawfords film a police car chase they use an old Ford Prefect or clapped out Holden, so when its written off by the evil crim the budget isn't affected too greatly. In the car chase in this episode, no high speed or squealy cornering was filmed, just a loud siren wailing police car driving behind the Bolwell down a suburban street. 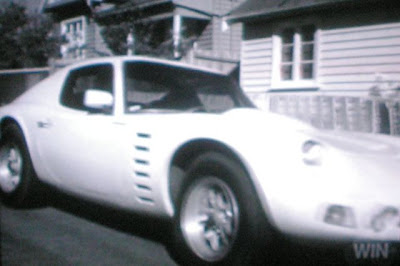 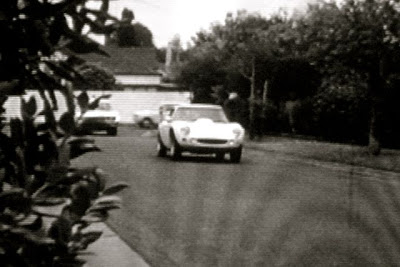 It is involved in a car chase (police car behind). 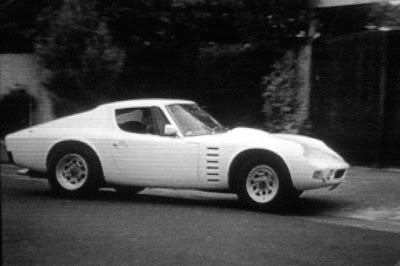 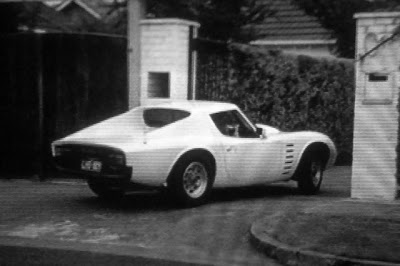 She turns into her driveway. 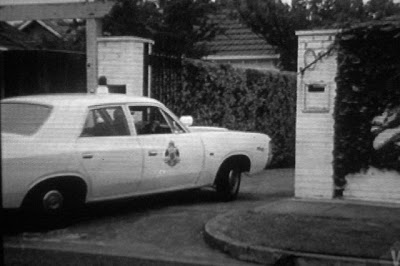 Followed by the police in a VH Valiant 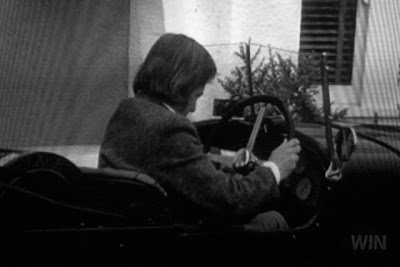 Earlier in the same episode this open vintage car was parked in front of the Bolwell Nagari. 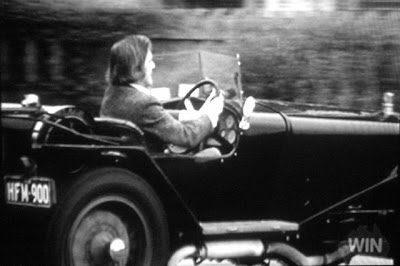 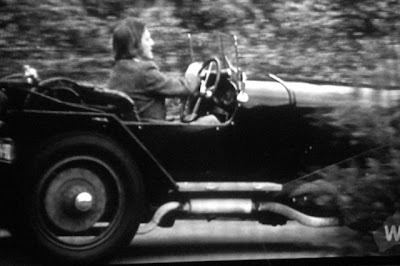 I'd love to know what it is. They didnt use a front shot, and it only appeared in this one scene. 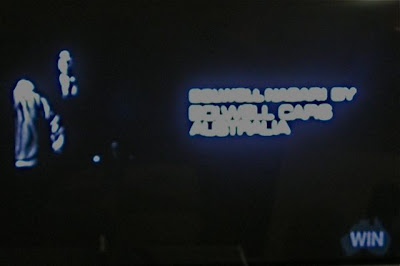 Poor quality shot, but it says 'Bolwell Nagari by Bolwell Cars Australia'. Obviously it was a factory car at the time, I wonder what happened to it ? 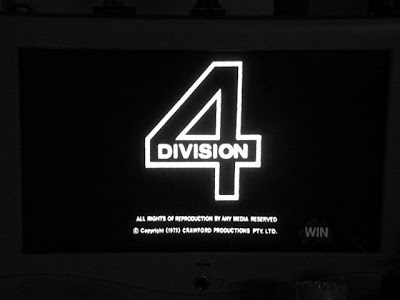 I last featured Bolwell Nagaris in this post. There is an excellent blog devoted to the Bolwell Nagari at Bolly Blog.
Posted by D.C. Haas at 7:33 AM 2 comments:

The Mighty Wez - Vernon Wells in an ATV on Matlock Police

I have a theory that all TV shows must be police/lawyer/hospital related to be successful. I dont know why, I suspect it is because people are voyeurs and like to watch human tragedy (as long as its not their own tragedy).  I dont watch contemporary police/lawyer/hospital TV shows, but I do record the old Crawford shows that are shown In Canberra on WIN TV at 2 AM several nights (or mornings) a week.

This weeks episode of Matlock Police, from 1973, was fairly ho-hum. Although there was an interesting subplot, about the registration of an ATV, featuring Vernon Wells - who went on to international acclaim as the Mighty Wez in Mad Max 2. 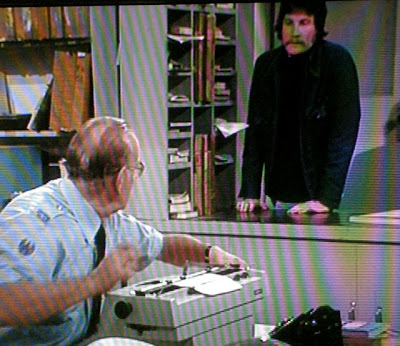 'Tommy' fronts the counter at Matlock Police station and asks about registering his vehicle. 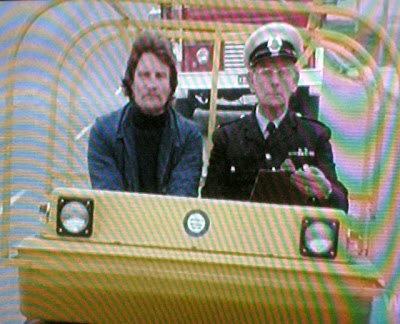 The Mighty Wez and Sergeant Kennedy go for a ride. 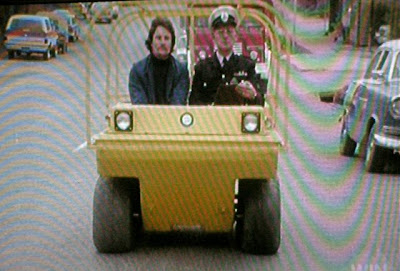 Camera pans out to show how silly this 'car' is. 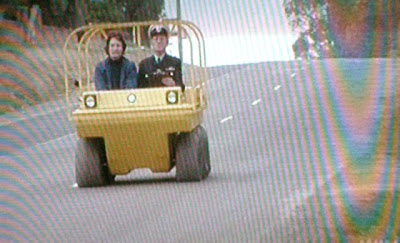 ATV crests a hill without running into a Mack truck. 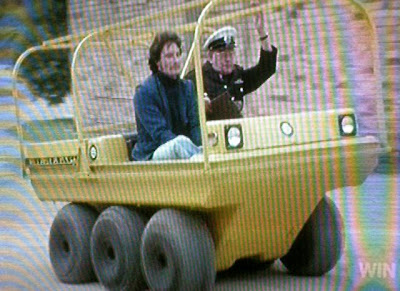 Then Wez proceeds to do some 'circle work' in a gravel car park. 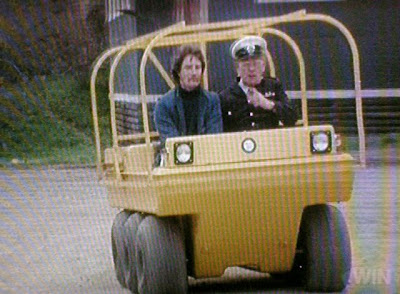 He got one line, and didnt smile once! Shave his head and dress him in US Grid Iron armour and he's ready for a dystopian future. 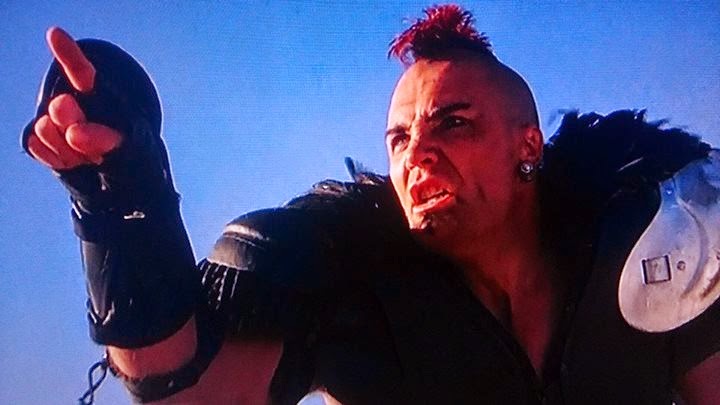 Vernon Wells in his most famous role


I will post some more car pictures from old Crawford shows, however quality will be low as I am using my camera to photograph the screen.

If you like this blog then bookmark the site, and also visit the Facebook page 'On Four Wheels' for more frequent updates.
Posted by D.C. Haas at 6:53 AM 2 comments: